Some months ago, I chanced upon a televised discussion between your Ms. Valerie Paley and Harold Holzer, who is very knowledgeable about Lincoln.  I tuned in just as they were discussing the Irish and the NYC draft riots.   Some seemingly innocent, but unfortunate comments were made.  Covid tragedy has delayed my response.

Most troubling is that historians talk about the draft riots and it never occurs to them to question whether the government illegally used deadly force against civilians.  In Battle Cry of Freedom, James McPherson comes the closest to admitting that happened in 1863 at New York City .

“The Department of War rushed several regiments from Pennsylvania to New York, where on July 15 and 16 they poured volleys into the ranks of the rioters with the same deadly effect they had produced against the Rebels at Gettysburg two weeks earlier.”

In fact no army regiments were rushed to New York from Gettysburg.  The military doing the shooting were feckless troops from the harbor forts and militia that had never left the city.  Among New York’s dangerous “Rebel” dead?  Too many women and children, judging by Adrian Cook’s list in Armies of the Streets.

The enclosed should be required reading for any of your minions who plan on venturing into the minefield of immigrants and the NYC draft riots. 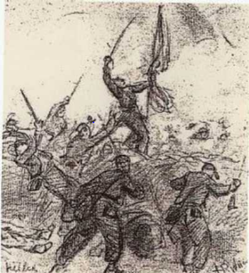