The Catholic Nun Who Was Sherman's Aunt

Mother Angela Gillespie in addition to her contributions to education of women and the welfare of Civil War soldiers was the aunt (or cousin?) of Ellen Ewing, the wife of William Tecumseh Sherman.  During the Civil War, Ellen Ewing and her children resided with her aunt at Notre Dame and were visited on at least one occasion by the great general.

*   *   *   *   *
Mother Angela Gillespie, original name Eliza Maria Gillespie   (born Feb. 21, 1824, near Brownsville, Pa., U.S.—died March 4, 1887, South Bend, Ind.),  American religious leader who guided her order in dramatically expanding higher education for women by founding numerous institutions throughout the United States.
Eliza Maria Gillespie was educated at girls’ schools in her native town and, in 1836–38, in Somerset, Ohio. In the latter year she moved with her widowed mother to Lancaster, Ohio. In 1840 she entered the Visitation Academy in Georgetown (Washington, D.C.), graduating in 1842. She returned to Lancaster for nine years, busying herself with charitable work, and from 1847 to 1851 taught in a parish school. During 1851–53 she taught at St. Mary’s Seminary, a nondenominational, state-supported school in St. Mary’s City, Maryland. Her long-standing inclination toward the religious life culminated in her decision in January 1853 to enter the Sisters of Mercy convent in Chicago. On her way there she stopped to visit her brother, a seminarian at the University of Notre Dame in South Bend, Indiana. She met Father Edward F. Sorin, founder of the university, who influenced her to join the Sisters of the Holy Cross, a French order with a convent at Bertrand, Michigan.
Gillespie took the habit and the name Sister Mary of St. Angela in April 1853 and was sent to the order’s novitiate in Caen, France. After taking her final vows in December, she returned to Bertrand as director of studies of St. Mary’s Academy, and in April 1854 she became superior of the convent. In 1855 St. Mary’s Academy was moved to a new site near Notre Dame and became St. Mary’s College. A believer in full educational opportunities for women, Mother Angela instituted courses in advanced mathematics, the sciences, modern foreign languages, philosophy, theology, art, and music. By 1856 nuns of the Holy Cross order were teaching in parochial schools in Chicago, and in 1858 the order established St. Angela’s Academy in Morris, Illinois. In 1860 Mother Angela began publishing a graded series of Metropolitan Readers for use in elementary through college-level courses. From 1866 she was largely responsible for editing Ave Maria, a Catholic periodical founded by Father Sorin.
In October 1861 Mother Angela offered the nursing services of the order to General Ulysses S. Grant. Within a short time, Holy Cross sisters were employed in army hospitals in Paducah and Louisville, Kentucky, and they later worked in Cairo, Illinois, in Memphis, Tennessee, in Washington, D.C., and elsewhere, as well as aboard hospital ships on the Mississippi River. The order’s main efforts went into the conversion of a row of riverfront warehouses in Mound City, Illinois, into a clean and efficient 1,500-bed military hospital.
The expansion of the order and of its educational work proceeded rapidly under Mother Angela’s direction. Among the 45 institutions founded by the order between 1855 and 1882 were St. Mary’s Academy in Austin, Texas (1874), St. Catherine’s Normal Institute in Baltimore, Maryland (1875), St. Mary of the Assumption in Salt Lake City, Utah (1875), and Holy Cross Academy in Washington, D.C. (1878). In 1869 difficulties between the American and French branches of the order led to the establishment of the American branch on an independent basis, with Mother Angela as provincial superior under the authority of Father Sorin as superior. Although she had been preceded by two mothers superior, Mother Angela was established as the effective founder of the order in the United States.
Source: http://www.britannica.com/EBchecked/topic/233751/Mother-Angela-Gillespie 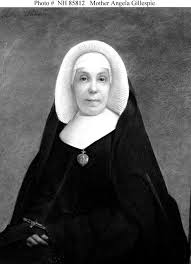